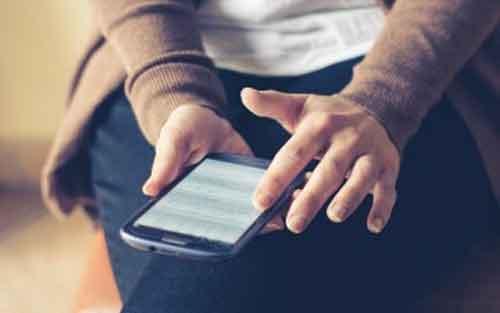 The sun’s ultraviolet light is a threat to the skin; that much is common knowledge. However, high energy visible (HEV) and ultraviolet light from the phone and similar electronic devices can be problematic as well. Let’s look at smartphone adoption rates and addiction statistics, and then go over some of the ideas contained in a Reader’s Digest piece that includes an expert interview with Dr. Fromowitz.

Cell phones are a technology that enhances our safety and gives us informational access at a moment's notice. However, cell phones are far from perfect.

According to statistics from Pew Research, an incredible 19 out of every 20 people (95%) in the United States now have a cell phone. Smartphones have actually reached a level of adoption that is nearing ubiquity: 77%. That's a rise of 42% since 2011 (when the adoption rate was 35%).

To look specifically at smartphones, ownership figures are different based on age group. The adoption rates for those in the 28-39-year, 30-49-year, 50-64-year, and 65+ groups show just how much smartphones are a sign of the new era: 92%, 88%, 74%, and 42%. The reason the ramp-up of smartphone use is so significant in those younger age groups is that it gives broader access to internet media and the potential for downloading many different types of apps – capabilities that in turn lead to phone addiction.

Think you might be addicted? Everything is relative. However, the general state of overuse among the phone-owning population is horrifying even from a social perspective, as indicated by these stats from King University:

The energy that comes from the sun is in a range of wavelengths – gamma waves are very short, for instance, while radio waves are remarkably long. When a wavelength is particularly long, that means it has the capability to go farther into your skin.

"HEV light specifically refers to the high-energy band of visible light in the blue/violet spectrum that has the shortest wavelength," Dr. Fromowitz noted to Reader’s Digest. “And that type of light seems to behave similarly to ultraviolet.”

What are sources of HEV?

How does the skin respond to HEV?

Essentially, the skin does not respond in a healthy way to this form of light – which deeply penetrates the skin, as indicated by a 2008 study.

"The consequences include premature aging, wrinkling, and pigmentation of the skin (sun spots and melasma)," Dr. Fromowitz advised the RD audience. "But, there is currently no link between skin cancer from such exposure."

Why are researchers focused on HEV?

Scientists typically will research the health impacts of the technologies that are being widely used. The primary concern with this form of light has been the impact on vision. Our eyes are naturally able to keep out 99% of ultraviolet light; however, blue light is a much more disturbing risk because it penetrates the cornea and lens before getting to the retina – an invasive property that could give rise to cataracts and macular degeneration. In other words, there are multiple reasons to avoid cell phone addiction.

How can you limit the HEV that hits your skin?

For skin protection related to ultraviolet light, you can use a hat, wear clothes that shield the sun, and choose the shade as possible. For HEV, simply put down your phone.

"At the end of the day the most important thing to do is limit screen time," Dr. Fromowitz told the magazine. "It's the only thing to help combat the exposure—not to mention it will help regulate your sleep patterns."

Does sunscreen protect against HEV?

People wonder whether there are products to protect against the HEV within sunlight. The strongest sunscreens, unfortunately, target ultraviolet but not HEV light. However, you can get sunscreens that contains antioxidants, which in turn will limit the oxidative stress that ages the skin.

Getting help to protect your skin

Are you concerned about how overuse of your cell phone or other behaviors have impacted your skin? You may benefit from a full body skin examination. At Dermatology of Boca, our patients are our strongest advocates: "Everyone I have encountered in the office is friendly and knowledgeable," noted our patient Robin. See our testimonials and reviews.